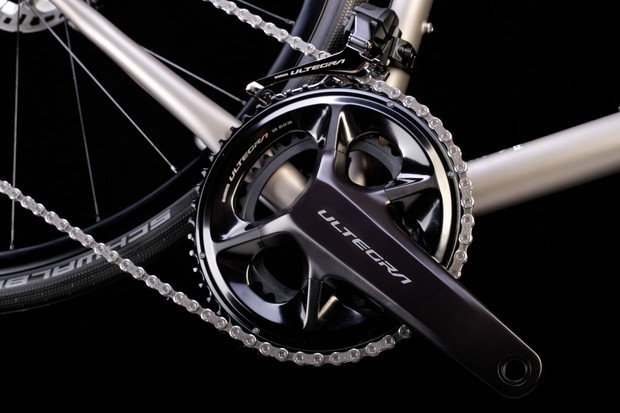 The new Ultegra R8100 is electronic-only and, in the disc brake version, wirelessly communicates gear-change inputs from the shifters while maintaining a wired connection from the rear derailleur and front derailleur to a battery mounted in the seat tube.

The previous battery won’t carry over to R8100 because Shimano has designed the new system around a smaller diameter wiring loom (SD-300).

The new Ultegra charges direct from the rear mech, so no junction box is required when configuring a bike.

Alongside the charge port being added to the rear derailleur, the rear mech also gets a function button to allow you to switch between shifting modes (synchronized and semi-synchro) without the need to connect to Shimano’s E-Tube app.

Synchronized shifting means the most efficient chainring is automatically selected on the front derailleur in synchronization with rear derailleur gear shifting, while semi-synchro is when the system automatically adjusts the gear on the rear cassette when a front shift is made.

The app will allow full custom options, such as multi-shift settings, STI button mapping (to assign the hidden buttons on the top of the hoods to control a Garmin, for instance) and use of third-party bike computer head units to display Di2 information (battery level, gear selection)

If you’re opting for the rim-brake option, it’s worth noting that this system is still fully wired.

However, because the brains of the system are now in the rear mech, you don’t need to use a junction box mounted in the frame (or under the stem), you can just run wires down to the bottom bracket junction. So even with the “old-school” Ultegra Di2 option, a rim brake bike should still look cleaner.

The motors, and circuit and transmission technology, are the same as the latest Dura-Ace, which leads Shimano to claim an increase in shift speeds: 58 per cent faster rear shifting and 45 per cent faster front shifts over the outgoing R9100 Di2.

Those are impressive percentage drops, though we’re only talking fractions of a second in current shift speeds.

Shimano has also been working to control shifting vibration and noise with its new cassette-tooth ramping profiles.

Shimano claims the new cassette profiles give ‘shockless’ shifting even under the heaviest of pedal loads, so you’ll never have to back off accelerating or soft pedal to shift with this new design, which Shimano has coined Hyperglide+.

Shimano’s transition to 12-speed for its electronic drivetrains hasn’t meant a re-shaping of the gearing. Instead, Shimano is sticking steadfastly to the regular 52/36t and 50/34t chainset options. There are two cassette options of 11-30t and 11-34t (Dura-Ace does get a massive 54/40 chainset and an 11-28 cassette option as well, if you’re looking for that truly pro-level gearing).

he addition of a twelfth sprocket has allowed Shimano to broaden the ‘sweet spot’ between the sixth, seventh and eighth sprockets. As a result, this is the progression for the two Ultegra cassette options:

The sportier 11-30t cassette has single-tooth jumps for the first seven gears, which should create a super-smooth platform for your cadence, whereas the broader 11-34 gets five one-tooth jumps before moving to two-tooth jumps for the next three again, offering progression with narrower gaps than the existing 11-speed cassettes.

Shimano has, as expected, brought learnings from the GRX gravel groupset, as well as the MTB groupset side of the company, to the new levers and brakes.

First, the lever shape now has a raised head and an inward curve to the lever itself – something that will feel very familiar to GRX Di2 users. This has the effect of increasing the space between shifter and bar, improving comfort when riding in the drops.

The raised head of the hood also means a much better – and firmer – hold at the hoods and the ability to get three fingers on the brake lever, again when holding the hoods.

Combine this with the Servo Wave design from GRX, which reduces the amount of free travel in the lever before the brake engages, and it’s potentially the upgrade we’ve been looking for when it comes to braking from the hoods.

To finish off the STI improvements, there is also reach adjustment with allowance for 16.4mm at the lever tip.

On the shifting side of the STI levers, the offset between the Di2 buttons has been broadened to apparently make it easier to differentiate between the two, especially when wearing thick winter gloves.