Spend more than AED 1,000 and Get up to 25% of E-Gift Voucher Now!
Buy Any Shimano 105 / Ultrega Groupsets - Get Free Installation + Free Pickup /Drop-off
Click to enlarge 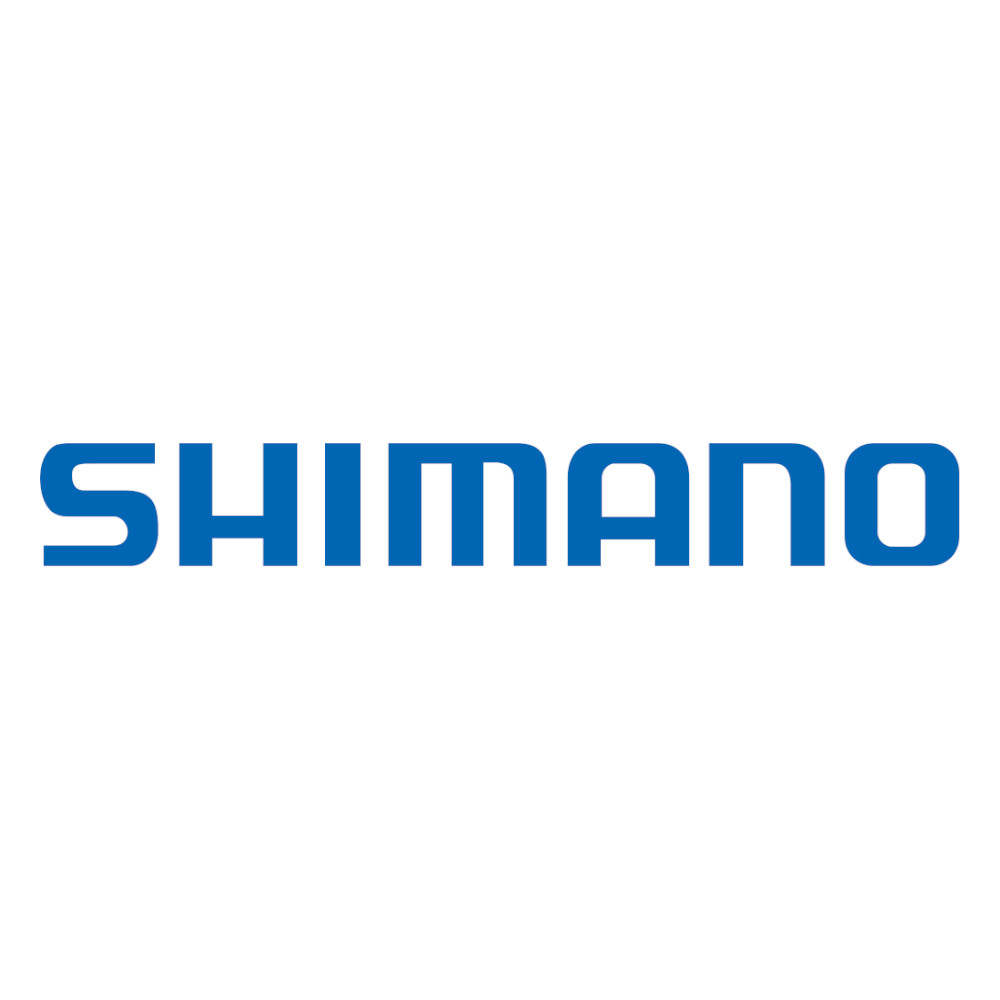 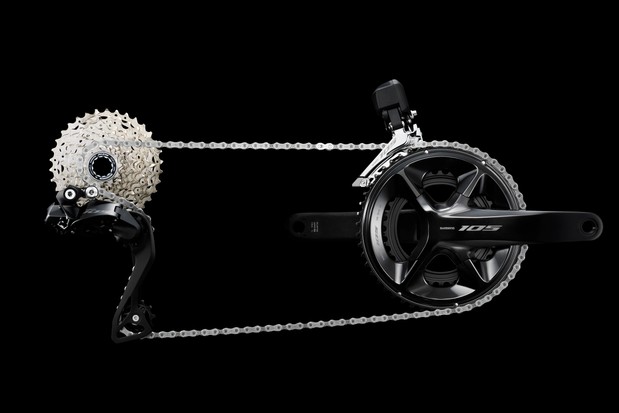 Like 12-speed Dura-Ace and Ultegra, Shimano 105 Di2 is semi-wireless.

This sees both derailleurs connected to a central battery, with the shifters then connecting wirelessly to the system.

By comparison, SRAM’s eTap groupsets are fully wireless, with both derailleurs controlled by individual batteries.

The rear derailleur houses the brains of the system, and is also where the groupset is charged. 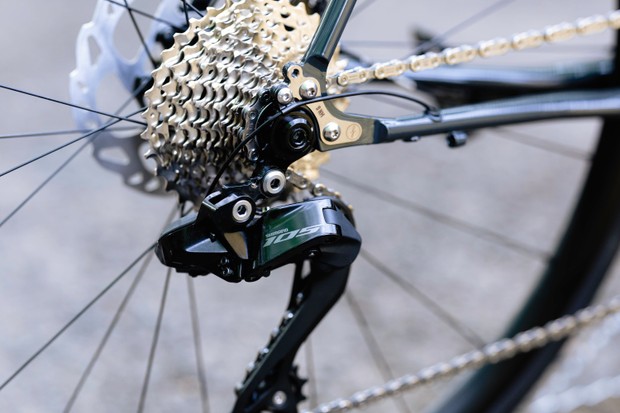 Here, we go over each of the components that make up the Shimano 105 Di2 R7150 drivetrain. 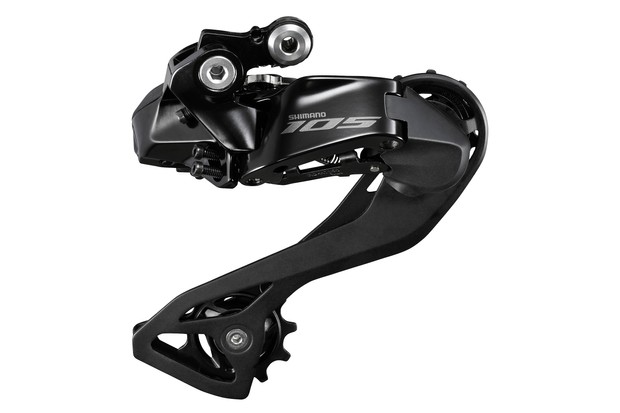 A single long-cage rear derailleur is available in the 105 Di2 family.

The Shimano 105 RD-R7150 Di2 rear derailleur is compatible with cassettes up to 36t.

It is aesthetically similar to both Ultegra and Dura-Ace, but features less complex forming on the knuckles, parallelogram and cage. The appearance is also more matt than the higher-tier groupsets’ shiny finish.

The charging port for the Di2 system is on the rear end of the upper knuckle. This removes the need for a junction box under the stem or in the handlebars, as was the case with previous-generation Di2 groupsets. 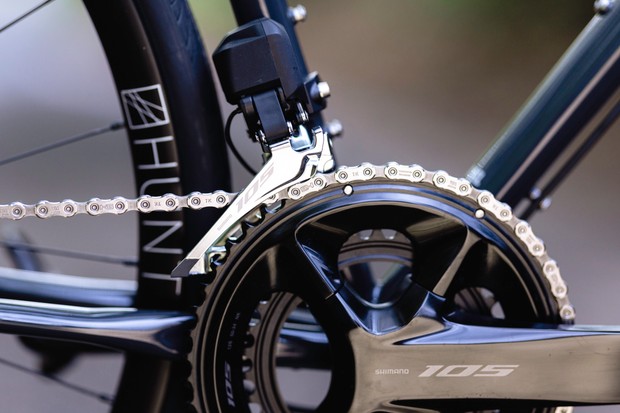 The upper housing is extended and – unlike Dura-Ace and Ultegra – isn’t offset from the cage, increasing the derailleur’s overall footprint.

It is not specified why the upper housing is larger, though we would speculate it uses different motors and controllers to the higher-tier groupsets. We have asked Shimano for more information.

The derailleur is compatible with chainrings up to 52t in size. The derailleur’s overall capacity (the largest difference in teeth between chainrings) is not specified in the Shimano press pack. 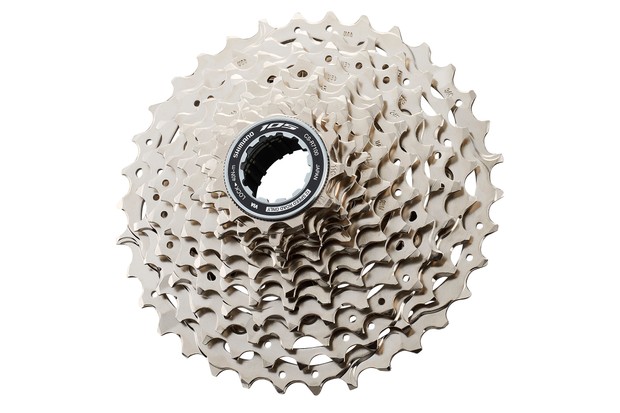 An additional non-series 11-36t 12-speed cassette (Shimano CS-HG710-12) is also being released alongside the groupset.

The first seven cogs of both cassettes are individual, with the five largest mounted to an alloy spider. All cogs are made from steel.

The cassettes mount using the new 12-speed specific freehub standard, but this is backwards-compatible with 11-speed HG freehubs. 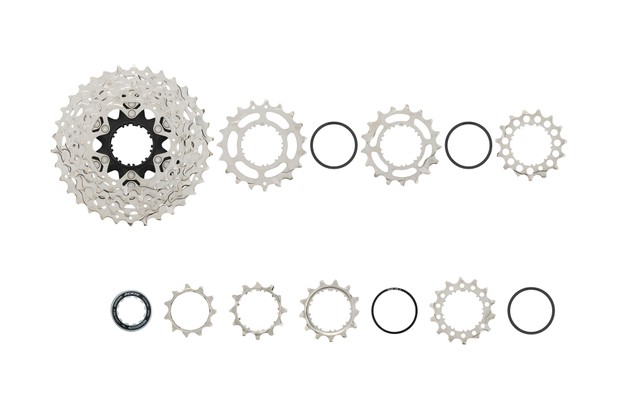 The new cassettes do not feature Hyperglide+ technology.

Initially introduced on Shimano’s mountain’s bike groupsets, Hyperglide+ sees the cogs on the cassette formed to help guide the chain down (ie, into a harder gear) the cassette.

Hyperglide+ was then ported onto the road last year with Dura-Ace and Ultegra. We’ve found Hyperglide+ to be very effective at smoothing out shifts and dampening down noise in testing. 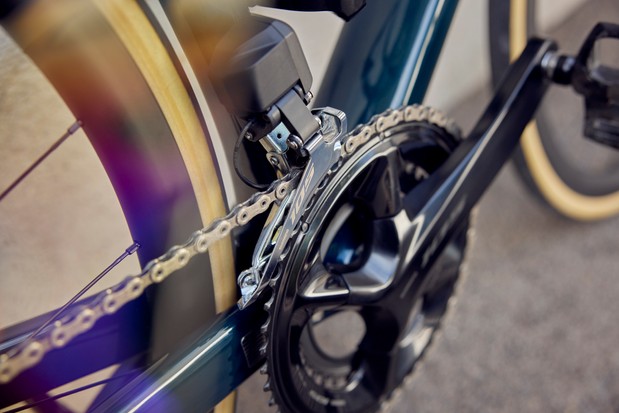 The groupset shares the M7100 chain, as used on the brand’s SLX mountain bike groupset. Shimano

Unofficially, we expect using either of these cassettes with the RD-R7150 rear derailleur will work, albeit with potentially reduced shifting performance. 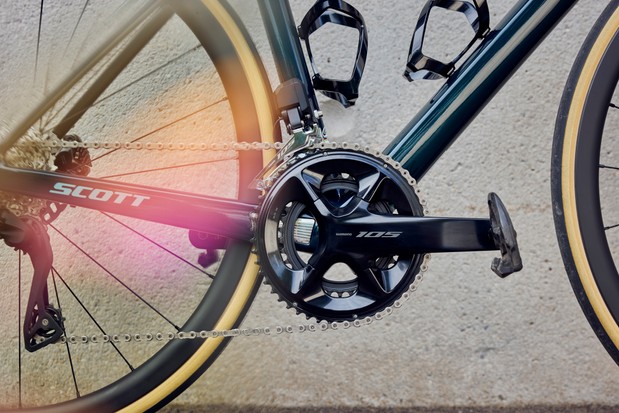 The new Shimano FC-R7100 crankset looks very similar to the top-tier Dura-Ace R9200 crankset, with a slightly less shiny finish and the same flat outer face on the crank arms.

A 52-36t option will also be “available at a later date”, according to Shimano.

The crankset has a Q-factor of 148mm and shares the same Hollowtech II construction as most of Shimano’s high-end cranksets. This sees two forged halves of the crankset bonded together to create a lightweight and stiff crankset. 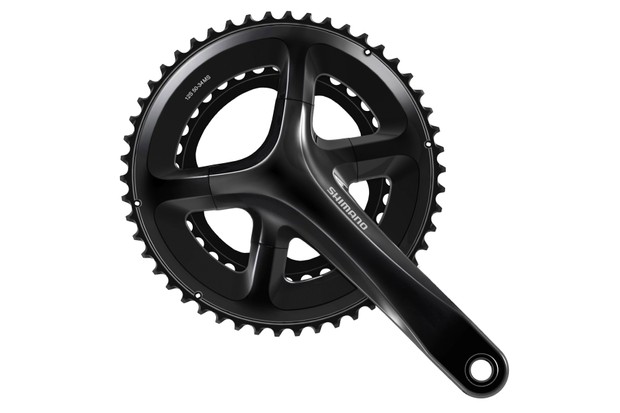 An additional 12-speed compatible non-series crankset is also being launched alongside the groupset. The FC-RS520 crankset features solid crankarms and is designed to work with bikes that use a 135mm rear end.

Most modern road bikes with thru-axels have a 142mm rear end. This affects the bike’s chain line and the FC-RS520 crankset will be offset to accommodate this. 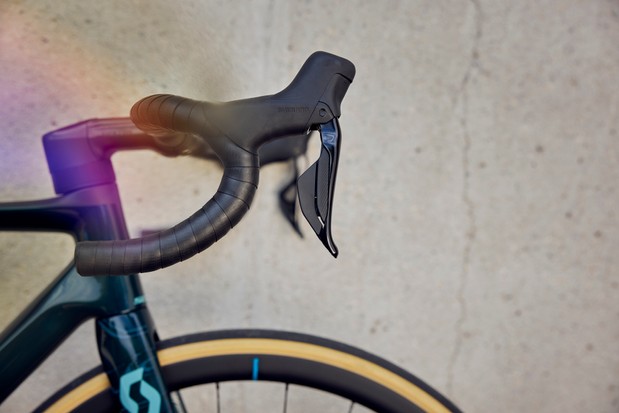 The new Shimano 105 Di2 ST-R7170 shifters are identical in layout to 12-speed Ultegra and Dura-Ace.

This includes the new shrouded lever and revised pivot placement, which is said to improve braking performance when riding on the hoods.

The shifters don’t feature the auxiliary hood button seen on the two higher-tier groupsets. They also lose out on the option to fit satellite shifters (or so-called ‘sprint shifters’).

The Shimano 105 Di2 ST-R7170 shifters are claimed to have a battery life of up to three years. They are powered by a pair of CR1632 coin cells in each shifter. 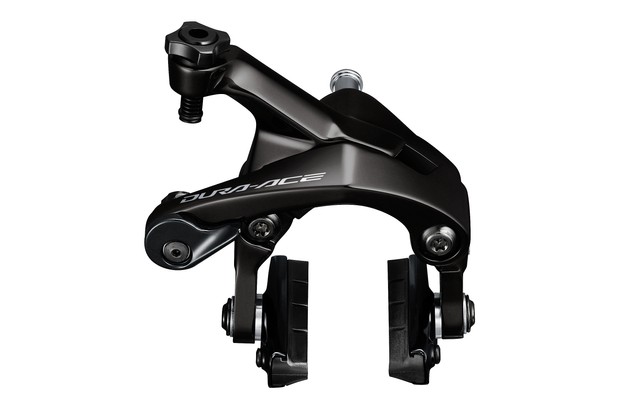 The new Shimano 105 Di2 groupset is only available with disc brakes.

This is the first generation of any Shimano road bike groupset family to be offered without a rim-brake option.

That’s not entirely surprising because few modern road bikes are specced with rim brakes, and the vast majority of 105 Di2 sales will be to OEM customers.

While perhaps a little anecdotal, we expect most riders looking to upgrade an older rim-brake bike will be considering either Dura-Ace or Ultegra – both of which are available with rim-brake shifters and matching brakes.

That said, we expect that riders who want to use 105 Di2 drivetrain components in conjunction with rim brakes will be able to use either Dura-Ace or Ultegra 12-speed shifters, but this is yet to be confirmed by Shimano. 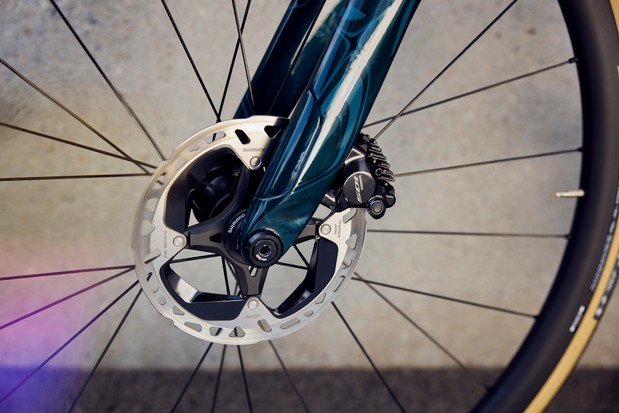 This includes the adoption of a new bleed port, which is accessible from the outboard side of the caliper. This makes bleeding the brakes much easier, especially when mounted on the inside of the rear triangle. 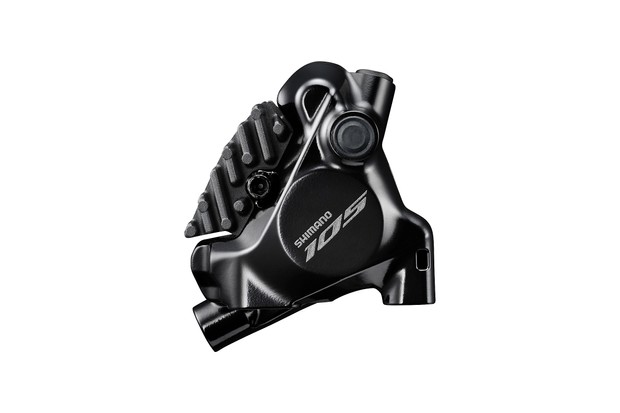 The pad-to-rotor clearance is also said to have increased by 10 per cent, reducing the chances of either rubbing in grimy conditions.

The brakes are only available in a flat-mount fitting. Non-series post-mount calipers will also work with the groupset if you’re upgrading an older frameset.

The nominally 105-level non-series SM-RT70 and SM-RT64 rotors carry over from the previous-generation groupset. 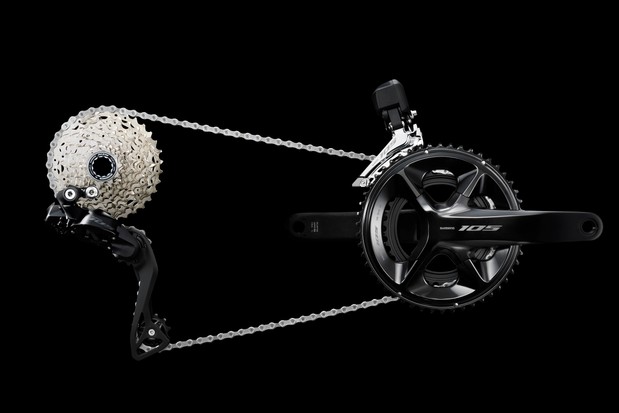 The claimed weights for each component in Shimano’s new 105 Di2 R7150 groupset are as follows:

Though it’s hard to make an apples-to-apples comparison, a SRAM Rival eTap AXS groupset is claimed to weigh 3,109g in a broadly similar spec.

Get up to 25% Off Gift Voucher on your Minimum Purchase of AED 1000 | You Don't Want to Miss This Chance!

Get UP TO 25% of E-Gift Voucher Now with Bikeera!

SHOP NOW
Start typing to see products you are looking for.